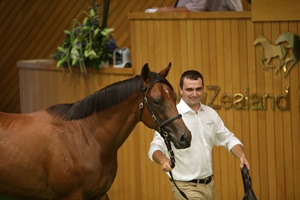 A pair of local buyers raised the stakes early on day two of the National Yearling Sale at Karaka as they secured a trio of royally-bred youngsters.

Lot 121, a Savabeel filly from O’Reilly mare Kashmir brought plenty of attention during her time in the auction ring. When the dust settled it was Cambridge trainer Roger James who produced the winning bid as he secured the daughter of classy racemare Vedodara for $400,000 from the Waikato Stud draft.

“I like a lot about the filly obviously,” James said. “I have a long-standing client that wanted a Savabeel filly and I thought she was clearly the best of them.

“It is the sort of money we thought we would have to pay. I don’t say it’s good value, but hopefully in two years’ time we are saying it’s wonderful value.

“She strikes me as a classic filly. You have got to buy with a chance of getting to a three-year-old classic and Savabeel has proven he can do it.

“The pedigree is a filly’s pedigree.

“All round I thought she was a beautifully balanced filly who has every chance of doing the job that we have bought her for.”

Underbidder on the filly, who hails from the family of multiple stakes winners Sharvasti, Shastri and Shandara, were Graeme and Debbie Rogerson who put aside any disappointment they may have felt on missing her when they purchased Lot 122, an Iffraaj colt out of multiple Group One winner Katie Lee, for $420,000 from the Cambridge Stud draft.

The colt is the younger half-brother of last year’s $1.025m sale-topper and once again attracted some fierce competition amongst the international buying bench before being knocked down to Team Rogerson’s last throw of the dice.

“There was strong competition for him,” Debbie Rogerson said.

“We nearly walked away but something just said have one last go, so we’re glad we secured him.

“He’s very athletic and hopefully we can get him to the Karaka Million.

“I think she will be a runner,” Graeme Rogerson said.

“I think good horses are selling well, the Savabeels are real hard to buy.

“I can always fit a good horse in (though).” – NZ Racing Desk