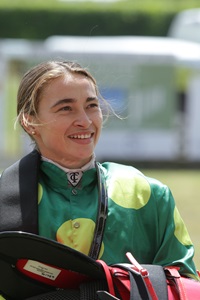 Apprentice rider Shiarna Johnson was the quintessential picture of calm as she scored the first winner of her fledgling career when guiding home royally-bred filly Simogramor at Gisborne.

Having just her second raceday ride, Johnson was entrusted with the mount on the $2.30 favourite after guiding the daughter of multiple Group One winner Katie Lee to a brace of trial wins recently.

Prepared at Tuhikaramea by Team Rogerson, Simogramor had been placed on debut as a juvenile behind the talented Espumoso, who has taken Hong Kong by storm with three wins from as many starts under the new name of Regency Legend.

That was as good as it got for Simogramor in four further starts before heading to the spelling paddock in September last year.

Handled patiently by her mentors, the Fastnet Rock filly showed a torrent of speed for Johnson when leading all the way to win her two preparatory trials by a combined 18 lengths prior to Sunday’s raceday reappearance.

Johnson adopted similar tactics as she let Simogramor slide along in front in the maiden 1200m contest and was six lengths clear approaching the home turn.

Cuddled up by Johnson, the filly was shortening stride as the challenges came but had enough in reserve to hold out stablemate Masarova by a head to provide Johnson with her moment of triumph.

Co-trainer Debbie Rogerson was thrilled by the performance of both Simogramor and her young apprentice.

“I’ve got a lot of time for Shiar, she’s come a long way in a short time,” she said.

“The horse runs for her although she (Simogramor) is really only a 1000m horse. I had to have her fit for the 1200m today.

“She (Johnson) rides her every morning and has won the two trials on her.”

Rogerson was also quick to pay tribute to former top-class riders Noel Harris and Jimmy Cassidy who have played a major role in educating the young apprentice.

“I have to say a special thanks to Noel Harris and Jim Cassidy as they have really really helped her,” she said.

“Noel introduced me to her 12 months ago and we started to teach her how to ride trackwork properly.

“She has progressed from there and I think she will be a very very good apprentice as she has a great nature and personality and is a hard worker.”

Johnson was quick to double her pleasure when she produced a carbon copy on the Rogerson-trained Hingis in race 4, leading all-the-way to win by a nose in a blanket finish.

The apprentice was taking the day’s proceedings in her stride when questioned about her riding background.

“I originally started riding trackwork around the Takanini area when I was 13 or 14,” she said.

“I stopped after a few years to try something different but got back in to it last year with the Rogerson’s.

“They helped me a lot to get to where I am today and I’ve also had a lot of help along the way from Noel Harris and Jimmy Cassidy.

“She’s a really lovely ride (Simogramor) and I thank Debbie so much for giving me the ride.

“My goal is just to have fun and learn as much as I can.”

The win by Hingis completed an early treble for Team Rogerson after Nuclear Fusion scored in the third race on the card. They made it four for the day when Pierian Spring won the last race of the day. – NZ Racing Desk