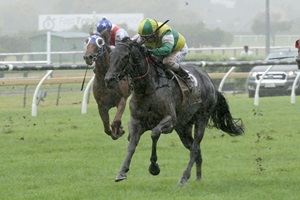 A mud-spattered Cameron Lammas completed an early raceday double in the worst of the conditions at Ellerslie on Saturday when he guided promising mare Sandrine home in the second race of the day.

Having taken the opening event on Spindle, Lammas produced a gem of an effort on the Team Rogerson-trained Sandrine as he navigated a path through the water-logged track in the 1600m contest that was run in the middle of a heavy downpour.

Lammas had the Savabeel four-year-old trucking along nicely under her own steam as he trailed his six rivals before angling wide in search of better ground in the home straight. Although not appearing to be completely happy in the going, Sandrine bravely lengthened stride to surge past race favourite Podravina in the final 100m to claim victory.

A somewhat dishevelled Lammas admitted he hadn’t been confident at any stage of the contest as his mount struggled in the going.

“She was great as she wasn’t travelling that good in the (heavy) track,” he said.

“She didn’t really like it and it wasn’t until I came out (wide), that she has just kept finding for me.”

Co-trainer Debbie Rogerson was delighted with how the mare had progressed in this campaign as she sets her sights on a possible Group One assignment next month.

“She was really hard and fit as we ran her today to make sure she was up to this grade,” she said.

“I don’t think she liked the track conditions but he (Lammas) rode her superbly, coming to the best part of the track.

“She’s a lot more mature now and we will definitely look at the big mare’s race at Te Aroha for her.

“She deserves a go as a four-year-old, although I think next season she will go a lot further.”

Bred and raced by Joan Egan, Sandrine is the daughter of Anabaa mare, Klarissa and hails from an extended pedigree that includes Group One winners Bonanova, Fraternity and Telesto. – NZ Racing Desk