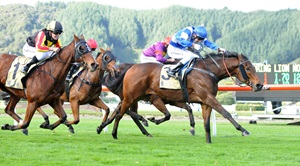 Talented four-year-old Comeback remains on track for a trio of black-type assignments this winter.

The gelding’s winning streak of five came to an end at Wellington last start, when he finished second to Dr Watson who was carrying 4.5kgs less than him.

“We rode him up on the speed because we thought we would need to, to beat the horse of Baker’s (New York Minute) and he ended up a sitting duck for a horse with no weight on his back and that may be the case again on Saturday,” Graeme Rogerson, who trains the son of Makfi in partnership with his wife Debbie and granddaughter Bailey, said.

Comeback will carry 60kgs in Saturday’s Bonny Glen Landfill (1400m) at Awapuni which is at least 6kgs more than his rivals, with Rogerson opting to retain the services of Johnathan Parkes.

“He’s up in the weights now but I decided not to claim on him,” Rogerson said.

“Johnathan knows him and he likes him.”

Rogerson said that Saturday’s run would keep Comeback ticking over for the Listed Powerworx Opunake Cup (1400m) on July 20, which he plans to contest before heading south for the Gr.3 Winning Edge Presentations 122nd Winter Cup (1600m) at Riccarton on August 3, with the Gr.1 Tarzino Trophy (1400m) at Hastings on August 31 his main goal.

“It would be nice for Gerry Harvey if he could go on to the Tarzino,” Rogerson said.

Harvey bred and owns Comeback and the first Group One race of the racing season is sponsored by his Karaka-based stud farm Westbury, where Tarzino stands.

The winner of eight races does have soundness issues which Rogerson is managing through alternative training methods.

“He does a lot of work on the treadmill and on the water walker, we’ve had to nurse him through a few issues,” Rogerson said.

Team Rogerson will have six runners on Saturday with Ottavio and Mutechi also running at Awapuni.

“They’re both a chance,” Rogerson said. “Ottavio has drawn a good alley (barrier one) and he handles the wet ground.”

However, the runner Rogerson is most excited about this weekend is at Te Rapa.

“I like the two-year-old Roc Cha,” he said. “She’s got the makings of a nice filly and she’ll run well.”

“Sherrifs Daughter will handle the ground and Straight Sets is always a chance.” – NZ Racing Desk.