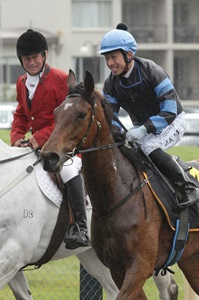 Unheralded apprentice Joshua Kam was straight back to his normal Sunday morning routine less than 24 hours after achieving his biggest racetrack triumph when guiding outsider Sweet Treat to victory in the Listed Staphanos Classic (1950m) at Rotorua.

It is that work ethic that has his boss Graeme Rogerson predicting a big future in racing for the 28-year-old who found his way to New Zealand in 2015 from his Singapore homeland.

“He is a good kid and it was great to see him get the reward on Saturday as he is a very hard worker,” Rogerson said.

“He turns up every day, never complains and works hard around the stable and our whole operation.

“He is excellent with the horses and is always looking for ways to improve his riding whenever he can.

“He spends a lot of time with Ryan (Elliot) who is out of his apprenticeship now but still with us.

“He takes on board what Ryan tells him and you can see that in his riding.”

Rogerson took on Kam in October last year after he had originally been with Dean Wiles at Pukekohe when he first arrived in New Zealand.

“He (Kam) wasn’t getting a lot of opportunities so he ended up moving around a little and came to us about a year ago,” Rogerson said.

“Ryan couldn’t make the weight for Sweet Treat on Saturday and when we couldn’t get a senior rider, I didn’t have any hesitation on putting the boy on as I knew he would do a good job even if he couldn’t use his claim.

“He did everything we asked of him and I think a few took notice as the phone has been ringing with people asking about him.

“Having that four-kilogram claim is a major factor and I think you will see him picking up more outside rides from now on.”

Kam was quick to admit that he had been feeling the pressure before the race, with the ability to relax and stay in the moment something he had been working hard on over the past few months.

“It was just such an unreal feeling to get that win but I was doing it tough in the days before the meeting once I knew I had the ride,” Kam said.

“It’s part of my nature to get a little stressed by getting ahead of myself so it’s something that I have been working on with a few people, to try and stay as calm as possible.

“I’ve had such great advice from Ryan Elliot and people like Sam Collett and Noel Harris so I was just trying to focus on what they had been telling me and try and do my best.”

While Kam was concentrating on what was playing out around him during the race, he had one piece of advice ringing in his ears as he hit the front halfway down the home straight.

“I started to feel confident we could be in the money with 600m to run as we were travelling so well and the rest of the field were scrubbing up to try and get going,” he said.

“When I asked her to go, she just powered her way to the front and with 50m to go I thought I had it.

“Debbie Colling, who is the partner of Ken Harrison who I worked for before the Rogersons, has told me that over and over again so all I could hear was her voice, but once I got past the post I did let out a bit of a yell.”

That Kam is even in the position he now finds himself in is a testament to his mental strength and fortitude after a serious leg injury threatened to end his career before it even got started.

“I had always wanted to be a jockey as my Dad had been one back in Singapore,” he said.

“I started off with Michael Freedman at home and worked for him for six years.

“One day I was on a horse that got a fright and we had a spill that resulted in me breaking my leg very badly.

“The Doctors told me that I would never ride again but I thought stuff that, I want to be a jockey, so I spent a year getting my health and fitness back and then went for it.

“I decided to try my luck in New Zealand so I came over here and started off with Dean Wiles before I moved to Ken Harrison.

“Ken used to get me to ride trackwork at the Rogersons and they agreed to take me on about a year ago.

“I really love it here and I’m determined to work hard and just try and keep improving my skills.”

Kam’s dedication to his craft is epitomised in his actions after racing was completed on Saturday.

“I came home and the first thing I did was ring my Mum back in Singapore,” he said.

“She is such a huge part of my life and she was thrilled with what I had done, so it was neat to be able to share that with her.

“After that, I sort of reflected a little bit about it all and then it was off to bed as I knew I had an early start on Sunday morning.”

Kam is now looking forward to the opportunities that might come his way with the victory but will be never forget the moment his life changed on a wet Saturday afternoon in Rotorua. - NZ Racing Desk