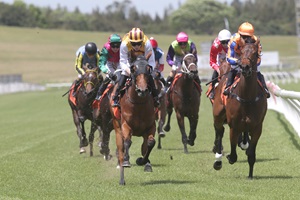 Promising two-year-old De La Terre will look to improve on the family record in the Karaka Million 2YO (1200m) after she looked to have cemented her place in the million dollar feature with a comfortable victory over 1000m at Te Rapa on Saturday.

The Reliable Man filly’s older sister Aalaalune finished a creditable fifth in the Karaka Million last season with trainer Graeme Rogerson of the belief that De La Terre has what it takes to make it at the elite level.

That belief was franked with De La Terre’s effort on Saturday where she sat outside leader Bordeaux Le Rouge before easing past him in the closing stages to register a one and a half-length victory.

“I think she is going to be a real top filly,” Rogerson said.

“She probably should be unbeaten but she did a little wrong on debut and got narrowly beaten, but she stepped up and showed her class on Saturday.

“She’s beaten some nice types and did it comfortably so there is a lot to look forward to.”

Rogerson was also relieved to see the filly walk straight into her starting gate on the weekend after she was late scratched at Trentham last month for refusing to enter the barrier before the Listed Wellesley Stakes (1000m).

“I don’t know what went wrong at Trentham as she is normally so good at the gates,” he said.

“We brought her back and took her to Cambridge last Friday and she went straight in and then she did the same again on Saturday so I guess you just have to put it down to one of those things that can happen in racing.

“She’s aimed at the Karaka Million but there are some nice options coming up before then so we’ll just take her along one race at a time.”

Rogerson was also delighted that he could produce a winning double on the day for Lotto winner Lou Te Keeti when the Te Keeti Bloodstock owned and raced Mr Universe scored over 1200m in the last race on the day.

“I think he (Mr Universe) could turn out to be a real good sprinter,” Rogerson said.

“He still does a lot wrong but he’s learning all the time and he has a real turn of foot when you ask him for it.

“He was impressive on Saturday and if he can keep that sort of development going then you will see him nominated for the good summer sprints like the Railway (Gr.1, 1200m) and the Telegraph (Gr.1, 1200m).”

Rogerson wasn’t disappointed in the performances of his other runners on the day including Aalaalune who finished close up in fourth over 1600m while Ferrando was runner-up behind Media Sensation over 1200m carrying a 60kg impost.

“Ferrando is still as big as a bull so there is plenty of improvement left in him,” he said.

“He had to give the winner seven kilograms and she is a very smart mare so it was no disgrace in finishing second.

“I think he looks ideally placed in the Telegraph as it’s run at weight-for-age now so that’s where he is heading.

“Aalaalune’s sectionals were exceptional and she is crying out for 2000m now.

“She is heading to the Royal Stakes (Gr.2, 2000m) at Ellerslie over Christmas and ultimately to the Oaks (Gr.1, 2400m) at Trentham where she will be very competitive.”

Purchased for $55,000 by Rogerson from the Westbury Stud draft at the 2019 Karaka Yearling Sale Book 1 session, De La Terre currently sits in third on the order of entry for the Karaka Million 2YO which is run at Ellerslie on January 25. – NZ Racing Desk