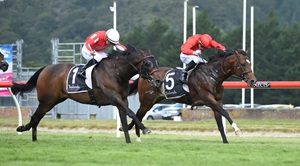 Team Rogerson will have a host of winning chances at feature meetings at both ends of the north island this week.

Smart sprinter Ferrando will head to Otaki on Friday where the Group One performer has a 60kg impost in the Listed Fasttrack Insurance - Levin Stakes (1200m).

“He is going enormous but he has to give the whole field seven kilos,” co-trainer Graeme Rogerson said.

“He deserves his weight, he has won a few races and the good track will suit him.”

Ferrando holds nominations for both the Gr.1 Sistema Railway (1200m) and Gr.1 JR & N Berkett Telegraph (1200m), with the latter a race the six-year-old entire has placed in the last two editions.

Despite Ferrando’s form reading better when racing left-handed, the Railway remains a target.

“He used to go well right-handed. He won the Mr Tiz (Gr.3, 1200m) at Ellerslie a couple of seasons ago and he will be aimed at the Railway and then we will just play it by ear,” Rogerson said.

“For an entire he has a lovely nature. He is a bit rowdy sometimes but he is lovely to ride.”

Consistent performer Beauden, the winner of six races, will tackle the Gr.3 Eagle Technology Stakes (1600m) at Ellerslie on Saturday.

“He is going well,” Rogerson said. “I couldn’t be happier with him and his last-start win was really good. After Saturday we will sit down with Joan Egan (owner) and work out where we are going with him.

“He is a lovely horse. He is a good type of stallion and he is starting to put it all together. He has a nomination for the Railway and the Telegraph as well,” Rogerson said.

“There is a race coming up at Ellerslie, the Newmarket Handicap (Listed, 1200m) that is an automatic entry into the Railway.

“We think he is a pretty good horse, he can certainly run time and he is very strong.

“He is a stallion and Debbie (Rogerson, wife) has him in her barn and is doing a great job with him. He looks fantastic.”

“Alaalune is an Oaks filly in the making,” Rogerson said. “She just has to learn to do everything right. She couldn’t have been any more impressive the other day and her runs have been good. I think she has the makings of a Classic filly.

“She will definitely be at the races at Ellerslie over Christmas and New Year. Which ones we don’t know yet.

“She’s thriving so we will just carry on doing what we are doing.”

De La Terre, a two-year-old sister to Group One placed Alaalune was an impressive winner over 1000m at Te Rapa last start and is likely to head to Trentham next week.

“She is improving all the time. I think she is third on the qualifying list for the Karaka Million (RL, 1200m) and has probably done enough to qualify for the field already.

“We have some nice two-year-olds to come out yet. Edge of Wonder is a nice colt that ran second on debut and will be back in the next couple of weeks. He will qualify for the Karaka Million.” – NZ Racing Desk