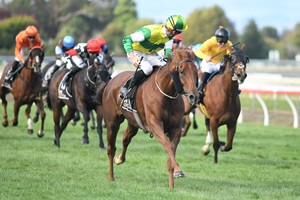 Last start Gr.2 Awapuni Gold Cup (2000m) winner Beauden is set to clock up further frequent flyer miles when he treks to Riccarton in a fortnight.

The Joan Egan-bred and owned six-year-old will contest the Gr.3 Coca Cola Canterbury Gold Cup (2000m), with co-trainer Graeme Rogerson convinced the weight-for-age feature is the ideal race for his charge.

“He’s a big horse who carries weight extra well, so the race looks made to measure for him,” Rogerson said.

“We had a good talk with Joan and she thought that was the best plan for him, so we’ll head down there and give the race a shake.

“He’s absolutely thrived since his win at Awapuni and is really enjoying life at the moment. He goes out on the farm each day and potters around and you can see how much he enjoys it.

“I’m not sure what we are going to do with him after Riccarton as it will depend on how he pulls up after the race.

“We have a couple of options to look at, but we could also send him to the paddock and have a good break before we get him ready for the spring.”

When the Bullbars gelding does go for a break, Rogerson will be keen to discuss an ambitious spring plan with Egan.

“I think he’s a class stayer and I would love to take him to Melbourne for the spring and have a shot at the big Cup races,” he said.

“I think he would be well up to them in Melbourne and the travel wouldn’t faze him as he is a superb traveler.

“Those are just my thoughts though and I would have to talk it over with Joan, but I’m hoping she will be keen as well.

“He really is a lovely horse to train, with such a terrific nature and he is getting better and better as he gets older.”

Rogerson is also planning to take a team of stable runners with Beauden to Riccarton with some of them set to stay down there in the hands of the Michael and Matthew Pitman stable, who produced Benaud to win for Rogerson and stable stalwart Denise Howell on Saturday.

“Pitty (Michael Pitman) does a fantastic job for us and they picked up a double with Kapalka and Benaud on Saturday, who used to race up here with us,” Rogerson said.

“We’re going to take a few more down there when we go with Beauden and some of those will stay on with Pitty and get the chance to win a few more races.”

Rogerson also advised that Gr.3 Soliloquy Stakes (1400m) winner De La Terre would step out at Te Rapa this Saturday after taking a break following an unplaced run at Trentham in January, while More Wonder would also run at Te Rapa following an eye-catching performance for fifth in the Listed Flying Stakes (1400m) at Awapuni. – NZ Racing Desk