Rogerson continuing to look to the future 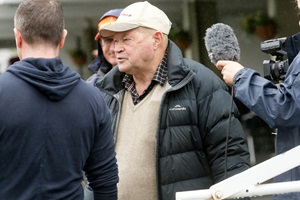 With 51 Group One wins to his credit, nine of them with wife Debbie, evergreen trainer Graeme Rogerson has no intention of settling for an easier life.

The Tuhikaramea-based horseman has enjoyed a colourful and hugely successful career and collected his latest top-flight tile with Mascarpone in the Gr.1 Otaki WFA Classic (1600m) last Saturday.

Among Rogerson’s greatest achievements at the highest level has been success in the Gr.1 Cox Plate (2040m) with Savabeel, the Gr.1 Golden Slipper Stakes (1200m) with Polar Success and a Gr.1 Melbourne Cup (3200m) with Efficient.

He is the only New Zealand trainer to have claimed those three titles.

“I’ve had some great horses, but when Savabeel won the Cox Plate I had never had a horse work like he did before the race,” said Rogerson, 74.

“He had a few quirky ways about him, but he was one of the greats. I went out and saw him at Waikato Stud the other day and he looks enormous, he’s a great stallion.”

Rogerson has been at his current Tuhikaramea base for more than half a century and concedes the time is coming when he will move on.

“I would say in the next couple of years we will be gone from here. I’ve been here for 54 years and Hamilton has grown out and I take one step and I’m in the city now,” he said.

However, relocation won’t necessarily see Rogerson settling for a quieter life as he also has extensive breeding and ownership interests running alongside the training operation.

“At the moment, I am happy with what I am doing. I’m looking at Ferrando foals today - I’ve got about 30 I own myself and will have some fun with them,” he said.

A speedy son of Fast ‘N’ Famous, Ferrando was a multiple stakes winner from Rogerson’s stable and twice placed in the Gr.1 Telegraph (1200m).

“I look forwards and not backwards, I’ve got some really nice young horses again and if I had a wish I’d like to have another Golden Slipper winner or the Cox Plate or Melbourne Cup again – that would be nice,” Rogerson said.

Rogerson is renowned for his non-stop approach and taking the good with the bad.

“You live and dream and it makes you get up in the morning, but you get your disappointments,” he said.

“Beauden has had a few issues and has gone out for a four-month spell and whether he comes back to what he was, who knows.”

The seven-year-old Beauden has been a stalwart of the stable in recent times with multiple Group wins among his 12 victories.

“I also had a really good filly called Princess Lowry and she’s fractured her cannon bone. She is as good a filly as I have trained for a long time,” Rogerson said.

“We’ll probably sell her at the Gold Coast as a breeding proposition and she’ll make a lovely broodmare.”

By Roc De Cambes, Princess Lowry placed at Group Two level in the Royal Stakes (2000m) and Eight Carat Classic (1600m) in a brief career before she suffered a career-ending injury.

Among Beauden’s wins was last year’s Gr.3 Canterbury Gold Cup (2000m) and the Riccarton feature is on the radar of Rogerson’s latest star Mascarpone.

“It was a great result at Otaki with Mascarpone. He’s a hard horse to train, he’s a handful so it was a great team effort,” he said.

“He is so strong and I’ve always thought he would go a mile. I don’t know whether sprinting is his caper, he’s quite awesome.

“We’re looking at the Canterbury Gold and in the spring there’s the Hastings carnival, he loves it there and won on two days last year.”

Never afraid to give young jockeys an opportunity, he gained immense satisfaction from the part played in Mascarpone’s success by his youthful partner.

“I got a real kick last Saturday with young Wiremu Pinn riding Mascarpone. I was going to put Jonathan Riddell on him, but he had taken another ride,” Rogerson said.

“I looked through who I could put on the horse and I thought this kid can ride. I said to him before the race, just rate him and come to the outside and he did everything asked of him.

“I also gave Rory Hutchins his first Group One win in New Zealand with Soriano in the Zabeel Classic when they all said I should put a senior jockey on.”

Rogerson also plans to be active at the upcoming New Zealand Bloodstock National Yearling Sale at Karaka and during his inspections he has been won over by a youngster to be offered by his great friend and stable client Sir Patrick Hogan through the draft of Carlaw Park as Lot 583.

“I’ve seen a filly of his in the sale and it’s probably the nicest one I’ve seen. It’s by Iffraaj out of Simogramor. She was a fast mare and just a bit offset at the knee and is out of Katie Lee,” he said.