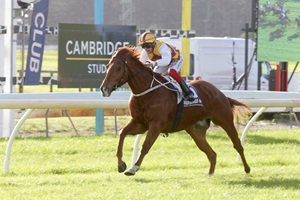 With her grandparents Graeme and Debbie in Brisbane putting the final touches on promising two-year-old Sharp ‘N’ Smart ahead of his assignment in the Gr.1 JJ Atkins (1600m) at Eagle Farm on Saturday afternoon it was left to granddaughter Bailey to manage the Rogerson racing team at Ruakaka and she produced a winning double for the stable.

Promising galloper Smart Rocks made it two wins from his last three starts as he dominated from in front when taking out a three-year-old 1400m contest in the hands of Matt Cameron before enigmatic four-year-old Golden Hue followed the same recipe as he led all the way over 1200m just one race later.

Racing in the colours of his breeder Gerry Harvey, Smart Rocks showed plenty of determination to achieve his victory after having to do plenty from the outside barrier (11) in the early stages to find the lead.

Cameron rated him perfectly to hold out Seresin and race favourite Reverberations in the run home, with Rogerson pleased to see him show plenty of fight.

“He had to do a lot of work early on and he managed to kick strongly on the corner to put a winning break on them,” she said.

“He is still very immature mentally but he is getting better every time he goes to the races and I think when the penny drops, we are going to have a lot of fun with him.

“It was a lovely ride by Matt as he let the horse do his own thing and he seemed to handle the shifty track really well.

“There are a number of horses who aren’t handling it today so it is a good sign for the future if we bring him back up here again.”

Rogerson was alluding to the final of the ITM/GIB 3YO Winter Championship series (1600m) on July 16 with Smart Rocks now sitting at the top of the qualifying table with 14 points.

She was also thrilled to see Golden Hue put it all together to gain his second career win with the son of Zacinto appreciating the right-handed way of going.

“He is a neat little horse who pops up when you least expect it,” she said.

“He loves going right-handed and I think the softer track combined with the on-speed bias there seems to be today really suited his style.

“He got to bowl along in front as his own speed and when he can get those circumstances, he can be hard to catch.”

Bred by Bloomsbury Stud, Golden Hue is raced by Lou Te Keeti and Graeme Rogerson and is out of the Rahy mare Only Alone who is a half-sister to outstanding dual Group One winning European mare Occupandiste, the dam of eight winners including Gr.1 Woodbine Mile (1600m) and Gr.1 Arlington Million (2000m) winner Mondialiste.

Unfortunately, Sharp ‘N’ Smart couldn’t add to the Team Rogerson winning tally although he did finish a gallant fourth in the Gr.1 JJ Atkins (1600m) after enduring an interrupted run in the home straight. – NZ Racing Desk