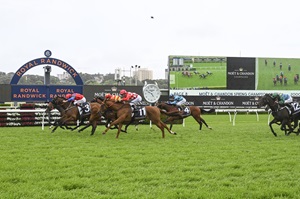 Kiwi three-year-old Sharp ‘N’ Smart called on all his resolve to land the A$2 million Gr.1 Spring Champion Stakes (2000m) by a nose at Randwick in the hands of Hugh Bowman.

Prepared by Graeme and Debbie Rogerson, the son of Redwood showed his staying prowess after travelling three-wide throughout but fighting on bravely to run down Gr.1 Caulfield Guineas (1600m) runner-up Elliptical.

The tough gelding will now travel to Melbourne to back-up in next week’s Gr.1 VRC Derby (2500m) and his Kiwi conditioners have long flagged the high-regard in which they hold the three-year-old.

“He’s a very good horse. He has nearly done what I want, he wins the Derby next Saturday and then he can have a holiday. He’s got a really big heart. He is still six months away,” Graeme Rogerson said.

“Hughie just said he went 50 yards further than anything but every time you ask him to do more, he just does it.”

“I haven’t had a horse like him for a long time. He’s only got one more week and then he can come home and have a good holiday. I’m going to run him in the Derby, he’ll go a mile-and-a-half no worries and he’s better on a good track than the wet.”

Rogerson, who previously trained Savabeel to win the Spring Champion Stakes in 2004, earmarked the $2 million feature after campaigning the lightly-raced youngster in Queensland, where he finished second in the Listed Phoenix Stakes (1500m) before finishing a luckless fourth in the Gr.1 JJ Atkins (1600m).

“He didn’t know anything in Brisbane. I’m going to bring five back for the autumn and give a few of your big races a bit of a touch up,” a typically bullish Rogerson said.

“He will win the Derby next week. A mile-and-a-half, he only does what he has to do. I put the visors on because when he saw that other horse the other day (when winning the Gr.3 Gloaming Stakes, 1600m) he just wanted to stay by it. He is half-human, he’s such a quiet horse.”

Winning jockey Hugh Bowman has been keen to stick with the stayer, but won’t be able to ride him in the Derby next week as he will be in Sydney for the Golden Eagle card.

“He’s a very courageous horse. I had a lot of confidence in him,” Bowman said.

“I was just lucky I was on a horse that has a great will to win. I know him well, he’s come a long way in the last six months and he’s going to continue to improve as a galloper. He is very exciting.”

“I knew it was a sticky draw but I didn’t want to fall into the trap of getting him up racing like he was over the mile at Warwick Farm when he bounced well and I rushed him into the box seat position.

“I just had to take my medicine but what I was able to do was get him into a really good rhythm, he wasn’t spending any gas and I knew I had the two to beat positioned right in front of me.

“That is why I didn't press forward to pocket them, I waited for them to inject pressure into each other. I did my work around the course but they did their work from the 700m to the line and the best horse came out on top.”

Bred by Gerry Harvey, Sharp ‘N’ Smart became the second Group One winner for Westbury Stud stallion Redwood, who is represented by 10 lots at next month’s New Zealand Bloodstock Ready To Run Sale.

Sharp ‘N’ Smart is out of a half-sister to Absalon, who won five races including two Listed victories in Brisbane.

Now the winner of four of his seven starts, with a further two placings, the gelding has won A$1,572,661