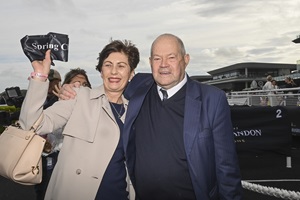 New Zealand Racing Hall of Fame trainer Graeme Rogerson has won the Gr.1 Victoria Derby (2500m) once and three times run second, and hopes to bolster that record on Saturday.

With the zest of a teenager, the 75-year-old horseman is showing no signs of slowing down as he attempts to add to his Group One haul of 53.

Rogerson's wife and co-trainer Debbie has an insight into the master trainer's psyche like no other and she believes that in Sharp 'N' Smart, the couple has what it takes to give them the result they crave at Flemington on Saturday.

Graeme Rogerson produced Efficient to win the 2006 Classic, while Ebony Grosve (1996), Savabeel (2004) and Duelled (2005) all finished second, a result the Hamilton partnership want to one-up this weekend.

The Rogersons produced Redwood gelding Sharp 'N' Sharp for a courageous win in last Saturday's Gr.1 Spring Champion Stakes (2000m) at Randwick and have few concerns about him handling the quick interstate backup this weekend.

"He's travelled down and arrived in super order. He left Sydney at 5 o'clock on Monday night and got here at half past three on Tuesday morning - and he hasn't turned a hair," Debbie Rogerson said.

"He got off the float like he hadn't had a trip at all. He was straight into his hay, his breakfast, his water and he seems pretty perky this afternoon. He seems to be a horse that can back up.

"He's tough and thrives on racing. He's super fit. He's a happy horse and we're very excited going into the race on Saturday. We couldn't be any happier with him."

Purchased for $55,000 as a yearling at Karaka, Rogerson prepared the scopey youngster for last year’s New Zealand Bloodstock Ready To Run Sale, where he failed to meet his $90,000 reserve.

A winner of four of his seven starts, Sharp 'N' Smart remained unbeaten in three starts as a three-year-old with his Spring Champion win as he advanced his career earnings to A$ $1,572,661.

"The Spring Champion Stakes was really satisfying. It was a hard run but he's tough and he got the job done," Debbie Rogerson said.

"We're so very proud of him. He never wins by big margins but he knows where the winning post is and he knows how to get there first.

"I don't think the step up to 2500m will worry him. We're proud to be New Zealanders with a top New Zealand horse here at the carnival - it's exciting."

Graeme Rogerson is no stranger to big-race success in Australia, having won races as illustrious as the Melbourne Cup, Golden Slipper, Stradbroke Handicap and the 2004 Spring Champion Stakes-Cox Plate double with Savabeel.

"Saturday was 18 years ago to that day that we won the Cox Plate with Savabeel so it was pretty emotional in that respect and he'd won the Spring Champion Stakes when it was run two weeks prior back then."

James McDonald will ride Sharp 'N' Smart for the first time in trackwork at Flemington on Thursday and takes over the raceday mount from Hugh Bowman, who was committed to an earlier booking to ride Fangirl in the A$10 million Golden Eagle (1500m) in Sydney the same day.

McDonald gained his first Group One win in Australia aboard the Rogerson-trained Scarlett Lady in the 2011 Gr.1 Queensland Oaks (2400m) and the couple would love to add another Classic with the champion hoop on Saturday.

"It's great to have James on. We gave James his first Australian Group One win and that was exciting for us and for him," Rogerson said.

Sharp 'N' Smart will be nominated for the Gr.1 Champion Stakes (2000m) at Flemington on Saturday week but Rogerson said that he was by no means a certain starter and any decision would be made in the best interests of the horse. - NZ Racing Desk