Wairoa carnival a highlight for Rogerson 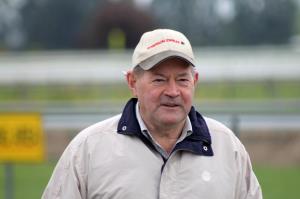 Hamilton trainer Graeme Rogerson has no problem making the four-and-a-half hour journey from his Tuhikaramea home to Te Kupenga racecourse in Wairoa, near Gisbourne - in fact he looks forward to it.

"Wairoa is the best country club in New Zealand," enthused Rogerson. "It's very well run by the community and that's why I continue to support it."

Rogerson, along with his training partner and wife Debbie, sent a team of seven runners to Wairoa on Wednesday morning and while he won't be able to make the first day of the meeting on Thursday, he will definitely be on-track for the club's Cup Day on Sunday.

First starter Eagle Magic contests the Vista Motor Lodge Dash (1200m), and Rogerson is expecting a forward showing from the daughter of Duelled who has trialled on five occasions ahead of her raceday debut.

"I think she's a very good chance and she's certainly shown enough in her past couple of trials to suggest she will be thereabouts," Rogerson said.

Back on Song and Command greet the starter in the Wairoa Stud Breeders 1200 with Back on Song considered the stronger chance. The four-year-old daughter of Postponed was a maiden winner at Rotorua before failing on the Slow 7 surface at Ellerslie on Karaka Million evening.

"She should be very hard to beat," said Rogerson. "You can put a line through her last run as she just didn't handle the wet track."

Mr Chez is being aimed at the AFFCO NZ Ltd Wairoa Cup on Sunday, but will have his first look at the Wairoa track in the Sunset Point Bar and Bistro Stayers (1850m) on Thursday.

"He is always a chance and should run well," said Rogerson.

The stable will also be represented by A Beautiful Knight  in the Wairoa Business Supporters Sprint (1450m), Alezan in the Elders Limited Distance (1850m) and Skylla in the Kenilworth Plumbing Sprint (1450m).

While reluctant to name a stand out amongst his runners, Rogerson said those following his team can bet with confidence.

"If punters back all seven of my runners, they will be in for a good day!" - NZ Racing Desk