Experience wins out for Scusa 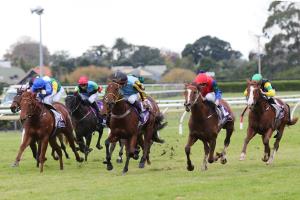 The betting market suggested first-starter Champagne Rein was the two-year-old to beat at Ellerslie on Queen’s Birthday Monday, but it was his stablemate Scusa who raced away with the major honours.

The son of No Excuse Needed came with a well-timed run under leading apprentice Rory Hutchings to win for trainers Graeme and Debbie Rogerson, who consider the gelding to be a bright spring prospect.

“He took a little while to get into his rhythm and we were a couple of spots further back than I would have liked,” Hutchings said.

“His experience definitely helped him and I was able to work into the race and then peel of their backs.”

Fourth in the Listed Great Northern Foal Stakes at his previous appearance, Scusa comfortably accounted for Admiral, who did well after racing three wide near the pace.

Road To The Bay made late ground to take third off Champagne Rein, a half-brother to the Gr.3 Concorde Handicap winner Mosse, who showed early gate speed to lead before tiring in the ground in the closing 100 metres.

“Scusa has the race experience and he’s just got better and better,” Graeme Rogerson said. “I think he’s a Guineas horse and we’ll see whether he goes again or we turn him out. Champagne Rein has got a lot of ability and is a fast horse who needs a bit better track.”

A $34,000 Karaka yearling, Scusa is a brother to the Gr.3 CS Hayes Stakes winner Take The Rap with their dam a grand-daughter of the Golden Slipper winner Courtza, the mother of the champion stallion O’Reilly. – NZ Racing Desk.