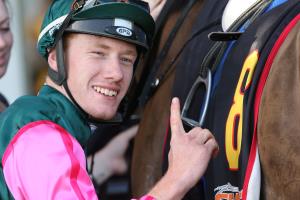 Rory Hutchings ticked off another target for the 2013-14 season when he brought up his century of winners aboard a willing companion at Te Rapa on Saturday.

The talented apprentice had been far from confident during the running of Empathy carrying him to the three figure mark, but the Chris Wood-trained six-year-old dug deep to the delight of his rider.

“That’s the last goal I set for the season and it’s good to get it off my back,” Hutchings said.

“He came off the bridle a long way from home and I didn’t really give him much chance until the last 100 metres and he kept on giving.”

In his fourth season of riding, the 19-year-old had been frustrated by his lack of big race success until this term when he was able to open his account at Trentham in the spring in the Gr.2 Wellington Guineas on Sacred Park.

He doubled that tally when he won the Gr.2 Manawatu Classic at Awapuni on Lady Cumquat in March and struck again the following month with Whosyourmaster in the Listed Napier Park Sprint at Hastings.

Hutchings credited the support and efforts of his employer Graeme Rogerson and his manager Aidan Rodley for his golden run this season, which has seen him join Matt Cameron, Mark Du Plessis and Johnathon Parkes in the century club. – NZ Racing Desk.