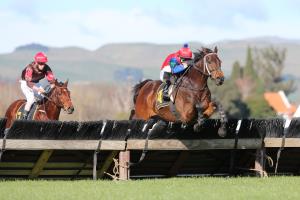 Versatile horsewoman Michelle Northcott capped an almost perfect week when she saddled Zenocoin for an impressive return to hurdling at Hastings on Saturday.

The jumping success followed the 42-year-old’s win in the amateur riders’ event Wingatui on Thursday aboard the Jack and Jo-Ann Gordon-trained Mr Nobody, a son of Duelled she bred and owns.

Northcott then caught a plane back to Hamilton and made it to the Cambridge harness meeting in time to drive Easy For Cullen into second place. She has six driving successes to her credit, and reined a winner during an invitation series in Italy two years ago.

A senior staff member at Graeme and Debbie Rogerson’s training operation, Northcott was the stable representative on Saturday at Hastings where Zenocoin was a hollow winner of the Te Whangai Romney’s Hawke’s Bay Hurdles.

“He had a few problems earlier in the jumping season and after a few trips out to Mrs (Ann) Browne’s place he’s come good so we’d like to thank her very much,” Northcott said.

Browne at least had the satisfaction of knowing she played a role in the winner’s performance as her own runner Real Treasure finished runner-up.

Successful in the Awapuni Hurdles last winter and third in the Hastings feature behind Sea King, Zenocoin was ridden by his regular partner Michael Mitchell.

“He was cantering around the corner and I couldn’t believe how easily he was travelling,” Mitchell said.

Zenocoin led two flights from home and eased clear to win by three and a-quarter lengths from Real Treasure. Just Got Home was third ahead of King of Rock and the former Great Northern Hurdles winner Waitoki Ahi was an encouraging fifth.

In the opening event on the card, Ken Duncan doubled his career winning tally when the diminutive Wee Biskit rounded off a series of placings to triumph in the Hawke’s Bay Hunt Maiden Hurdles.

The Hunterville identity had celebrated his first success with Mister Deejay in a novice steeplechase at Awapuni a fortnight ago.

“She came to us as a polo pony and she’s very small, hence her name,” Duncan said. – NZ Racing Desk.